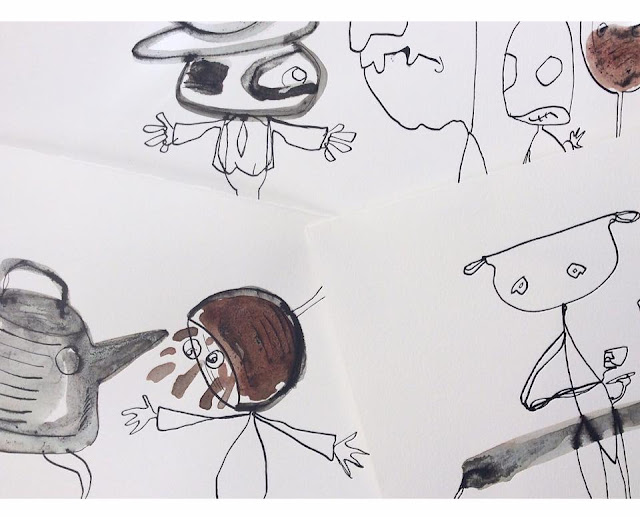 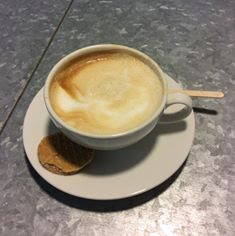 Exhibition will run up and unwill with April 30th.

Stroop often opens up in the evenings for some pretty interesting programmes and events. Like their Wild Worldsoup on Friday evenings: homemade soup for € 3,50; soup, stroopwafel (syrup waffle), and coffee/tea for just € 5,-! 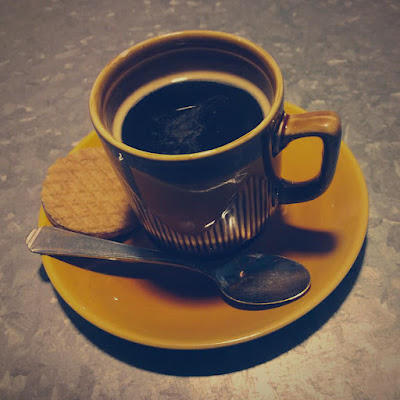 'Sleep No More': about Insomnia and a Witty that never sleeps 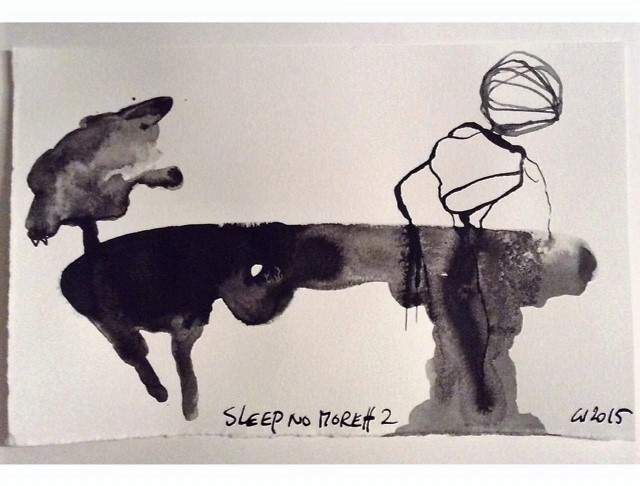 'Sleep No More' is another of those Witty Art Series created a while back, but never shown before. It's all about sleep, or rather, the lack of it. And I should know, because I suffer from bouts of chronic Insomnia.

For as long as I can remember, I have had difficulties falling asleep or sleeping badly, or at least, not getting enough sleep. And, at times, I have been the quintessential Insomniac, going on for several days and nights in a row with hardly any sleep. I've stopped keeping track of how many times I stayed up during nights, watching the sun come up, often going out for an early morning stroll, being witness to a world awakening. And no, none of this was or is because of me taking weird pink pills or any other chemical stuff. And I am not hearing voices either.

It's just exactly as in the famous Faithless song: ''I can't get no sleep''. 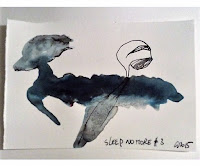 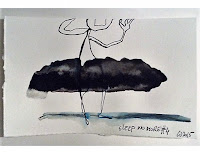 My ever Ever Wandering Witty Brain basically acts and works like a spunge, soaking everything up, that is continiously being triggered, is constantly thinking, creating, visualising, making plans.

So, it's not surprising that these periods of Insomnia are also the ones of an extremely hightened creativity. Like a volcano about to erupt. Now, I always feel the need to create, to draw, to paint, to write. That is a very basic, crucial need, one that comes from deep within me. But during those insomniac times, when I hardly get any sleep or no sleep at all, it's like one big creative explosion in my mind, and it comes out in waves and waves of sketches and drawings, of writings, notes, ideas, and so on.

It's as every bit as exciting as it is exhausting. 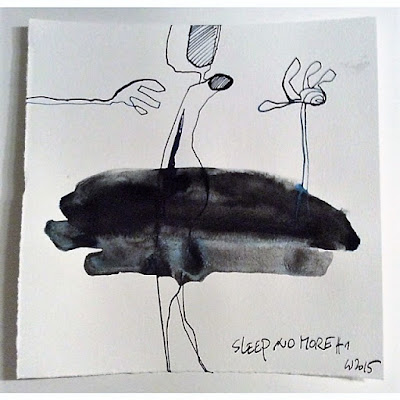 Well, work goes on, no compromise there. I am a professional, after all and I gotta job to do. And, though you might expect otherwise, my other work does not suffer as a consequence from my periods of sleep deprivation. I just work around it. The way I see it, I all of a sudden am able to make the most of those 24 hours in a day. And, I hasten to add, those periods of insomnia don't last too long. After a while, I do get tired and more or less fall back into a relatively normal sleeping pattern. That is: feeling tired enough to want to go to bed, fall asleep and not waking up too much during the night. 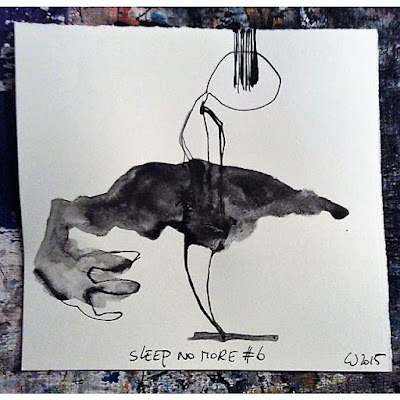 So, I've tried to come to terms to my on-and-off relationship with Insomnia, whom I've come to see as a dear, old friend. But a difficult friend, one who's unpredictable and demanding and known to show up at the most inconvenient times. But, still, a dear friend as she (for me, it's a she) has come to know me veru well, unlike most people I have come to know, and she has been the katalyst for some of the most intense artwork I have made.

Bottom line: I do not resist. When Insomnia calls, I do not resist. That's our deal: she gets her quality time, so to speak. Perhaps it is I who keep her company during those nighttime hours, not the other way around. In return, she does not really overstay her welcome and makes sure she is gone after a couple of nights together. That way, I can happily revert back into Morpheus' arms. 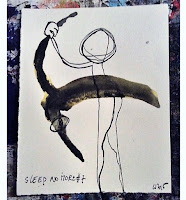 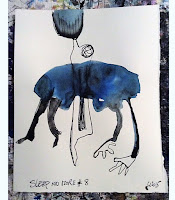 'Sleep No More' was, like many of my recent work, created during such a period of little sleep and hypercreativity. But it was for the first time I realised I managed to capture the image of my sleeplessness, in both its most haunting and haunted state. When I shared some previews on my Instagram, some people commented that it reminded them of nightmares. Now, for me, that is not really the case but I can see where they are coming from. To me, 'Sleep No More' is just another way of paying tribute to some of the most powerful forces that has enabled me to create some of the best of Witty Art. It makes perfect sense to me.


You gotta treasure your Muses, and here is one!

So, here's to you, Insomnia. May you be my nightly companion for the rest of my life, though not every night. I'd prefer our relationship to be one of ''Living Apart Together''. 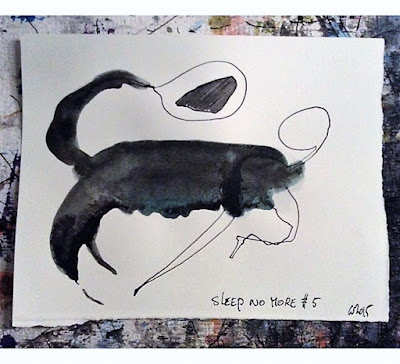 A Perfect Day to say goodbye: just a little two-piece I am sharing 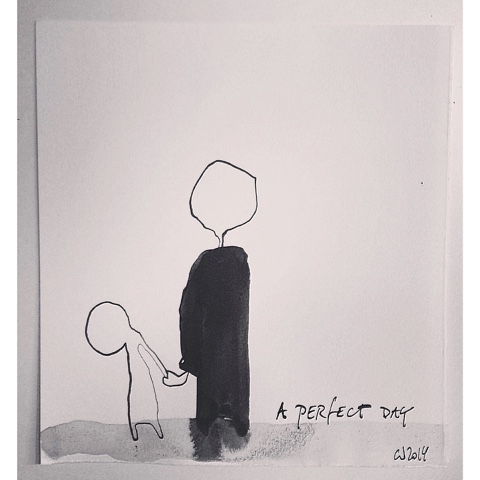 Just showcasing a little two-piece I created way back in the winter of 2014. The most handsome, sweetest cat in the whole universe had just made his final journey out into The Great Beyond. It was one of those sad, grey, dreary days that the skies just can't stop crying and you feel they are crying because of your loss and your loss only. Pathetic, I know, but then again, we all feel like that sometimes, for some stupid reason or for no reason at all.

And the skies stopped crying. The sun came out. 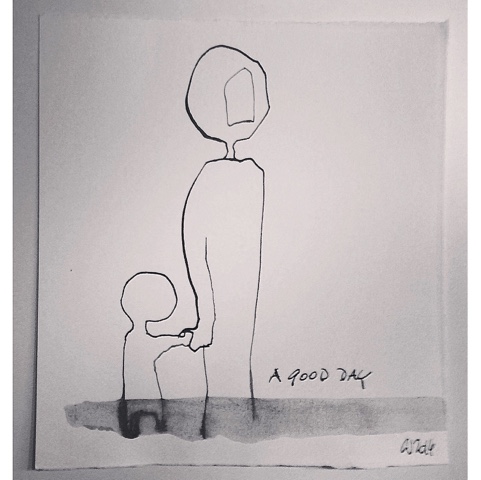 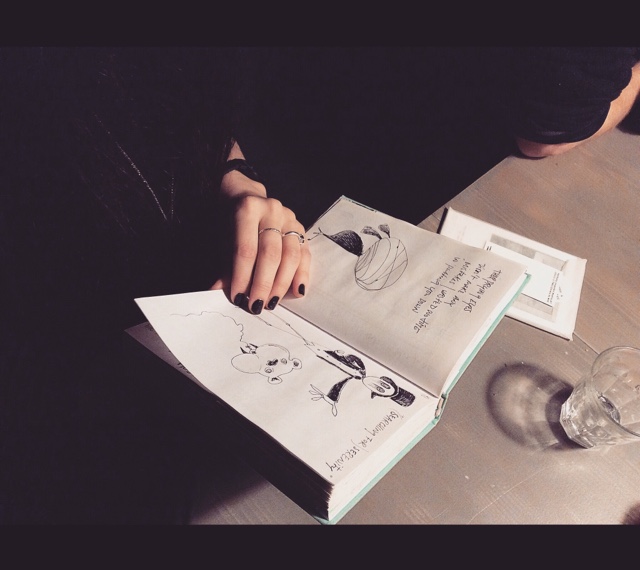 A while back, on December 16th 2015 to be precise, I attended a very special get-together with fellow artists. An Artist's Saloon is a small and informal gathering of artists with similar interests and ideas or concepts and meant to share insights and inspiration with each other. Organised by fellow artist and host of the evening Daniel van Nes (whose work I absolutely adore and whom I had the pleasure of sharing an exhibition with way back, during the summer of 2013), this was a so-called  ''Dark Art Edition''.

I brought some of my most recent pencil drawings as well as my Witty Art Book ''My Life In Limbo'', which provided input for some interesting discussions and some food for fought as how to take my art to the next level. Some seriously interesting suggestions were made and I am currently exploring all these.

So, it turned out to be one extremely inspiring evening - and yes, there will be definitely a follow-up! 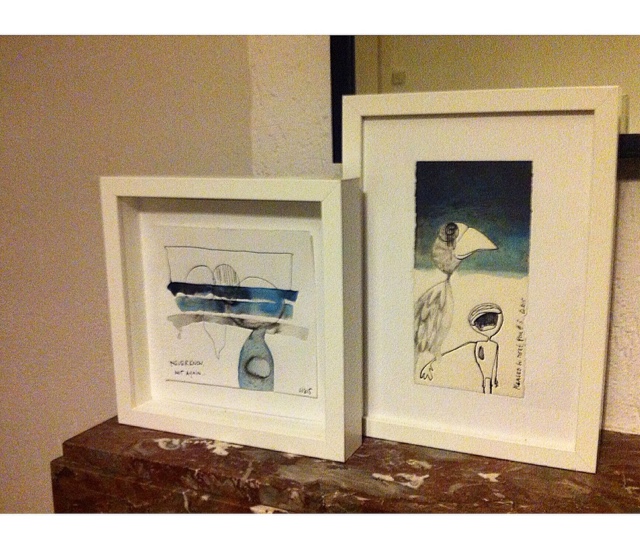 Sold these two pieces of Witty Art quite a while ago. Here they are on display at their very happy new owner's home: ''Never Know, Not Again'' (left) and ''Pleased To Meet You #3'' (right). Both drawings were shown at the Pop Up Expo ''Maak Het Mee'', early 2015 and were purchased right there and then by its new owner.

It's always a great feeling to see my work on display at their forever homes! Check this page to see more Witty Art decorating people's homes or offices. 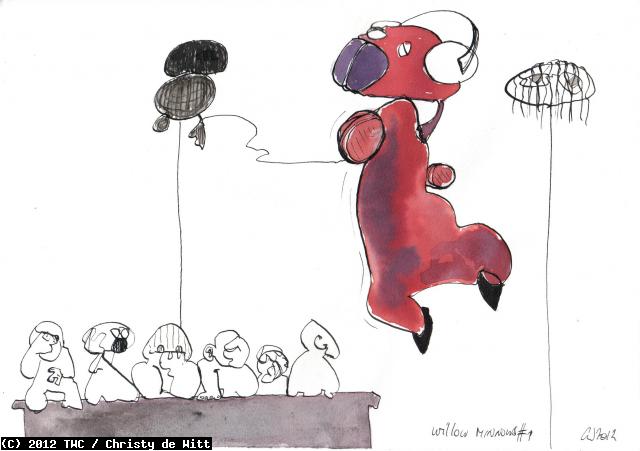 In 2012, I began working on a series called ''Willow Minnows''. As often in my work, this series also featured a bunch of little ''unsung heroes''. The little folk battling the far higher powers that be. The first two drawings came about pretty quickly, then somehow, my attention got divided and turned elsewhere, to other Witty Art Series.

It was not sooner than fall 2014, when I started working on what I thought was a new set of drawings, for a fresh new series. But as I was working on them, it soon became clear that these were part of ''The Willow Minnows'' family, or tribe, or whatever you want to call it.

It's within the very nature of Witty Art Series that some are ''ongoing'', as in: I can work on them enthusiastically for a while, and then put them aside for a while. Not because I am done with them at that moment, but because I have said what I wanted to say for now and it's time for a break. And it's not that I forget all about them, as I work on other series of drawings, and Singles too. It's more like often some work needs to rest for some time, to grow, to ripe, pretty much like a fine wine or cheese. And some work needs a bit longer time than others.

To me, it's always a surprise when I look at work I've stored away for a while. Will I find the work still as interesting, as thrilling as I first created it? Will I see new things, discover new insights, feel something I didn't feel before? When I do, I almost always instantly know there will be more of these. New additions to this specific series, or new ways of exploring the theme in a more Singles-like manner.

Sometimes, I just find the series is ''done'' all together. And that's also fine.

But in the case of ''Willow Minnows'', none of the above. I just started working on them again, while not even knowing or realising I was doing so. And, it was just as good that I did, as I managed to sell one of the later drawings almost immediately.

Just goes to show what a bunch of cheeky ones these ''Willow Minnows'' are. Never underestimate them - at least I won't!

I will dedicate a separate blogspost to these new drawings soon! 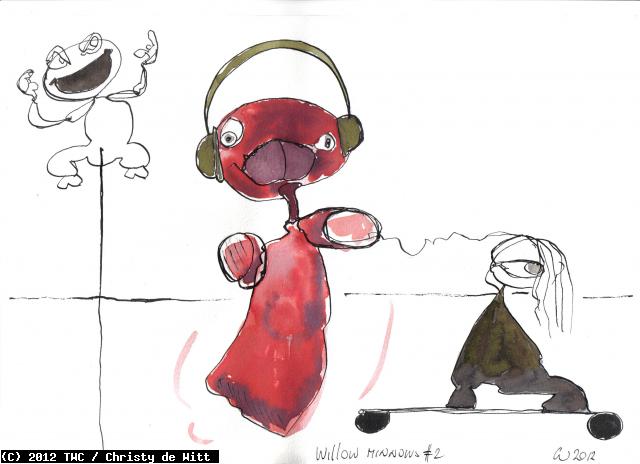