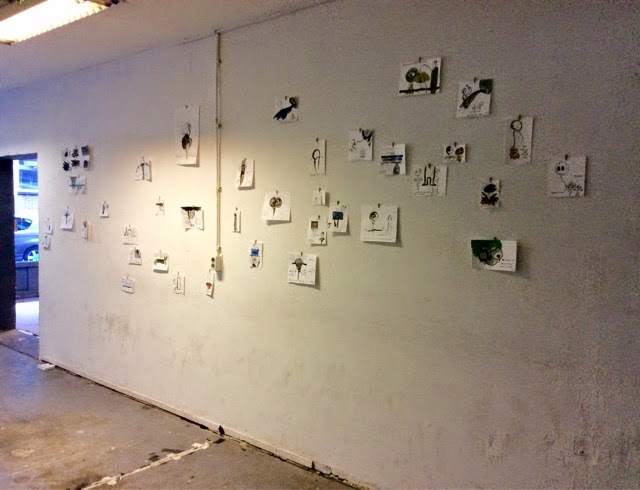 So, as explained in my previous post, I got the all-of-a-sudden opportunity to showcase my work during a pop-up exhibition, as part of a the project I was co-organising. As I was quite busy with coordinating the bigger project, I originally decided to showcase a selection of older work but somehow, that just didn't feel right. The empty store which we were allowed to use for our exhibition, is in such a run-down state, that it screamed for a more playful set up, a more experimental showcase than usual. So I came up with the idea of creating my very own Witty Art Wall: a wall filled with a selection of recently created, small-sized drawings, interacting with each other. All of the drawings being part of a bigger story, all of them together forming this one big moodboard, telling the story of my life, my art, over the past months. 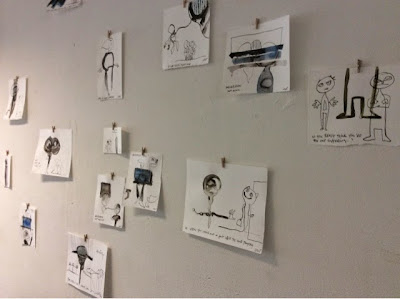 Almost like a giant mural, but one continiously changing, alternating over a whole week, as I plan to play with the position of some drawings, creating new ones and adding them, perhaps taking some off and replacing them by old ones. One week-lasting work-in-progress, which will help me to determine into which direction my art, and thus my life, will go this coming year.

Because, in more than many ways, 2014 has been a turning point for me, both privately and professionally. I was faced with having to make some extremely difficult choices, having to let go of things that have proved to be nothing but false security - but still a enormous challenge to let go of. It was a year of having to face myself, and some of my biggest fears, my dearest demons and a lot of other things, people even, I'd held dear for so long. I pretty much killed some darlings last year. But I had to. I had to in order to move forward and channel all my energy and focus towards realising my life long dream: conquer the world with Witty Art. Or at least give it my all trying! 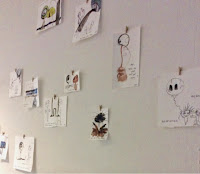 Perhaps, most telling is this. Last couple of months I have been suffering of what I call a bad case of 'GottaDraw'. GottaDraw I use as a term to describe those feverish outbursts of just having to draw, no matter what, of needing to create or you'll go mad (which sounds pretty dramatic, I know, but to me, it simply is like that). I think this case of GottaDraw resulted in over 250 new Witty Art Works in just two months, not even sure, I tried to count but I gave up.

Anyway, one of these drawings turned out to be 'What D'Ya Mean, You Brought Back Our Favourite Disease?'. At first, I thought, 'how funny, that's based on an older drawing', and didn't give it any further tought, but I did decided to put it up on the wall. But I couldn't ignore the sensation of being reconnected with an estranged family member, as it were. And when I was looking at it, I realised this drawing was trying to tell my something. So, I brought out the original - not the actual original drawing, as I didn't have that one with me, but a printed postcard of it. I put the two up on the Witty Art Wall together. 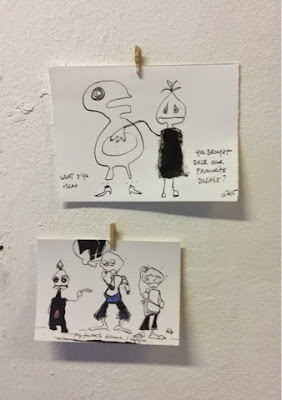 You see, 'My Favourite Disease, I suppose', was created in 2008, shortly after a long period of creative drought (which I mentioned before in a couple of previous blogs). Actually, it was one of the first drawings I made after all those years. That simple drawing kicked off a series of events I never imagined to happen. I had given up on drawing, I had given up on creating. I had given up on my dream of sharing my art with other people. I never expected for Witty Art, my art, to be where it is now - so imagine where it can be in a couple of years' time, or even in a year's time.

That one simple drawing marked a whole new beginning for me, seven years ago. So imagine how touched I was when, seven years later, this drawing appeared on paper, a dear character reappearing, like a long lost relative. .. and the most beautiful thing of all is, that I finally figured out what ''My Favourite Disease'' really is. All that time, I never even knew myself what those words meant. But now I do. And it's a disease I never ever want to be cured of, not ever again.

You see, I'll gladly suffer a bad case of GottaDraw. Anytime. All the time.

And that means, you have not seen the last of Witty Art yet. By far not. 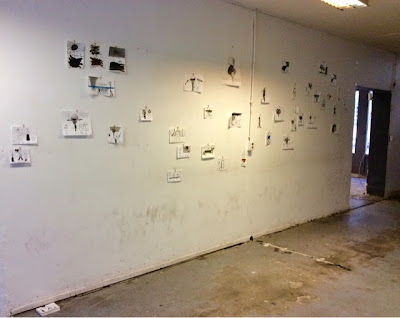 'To Bring Back My Favourite Disease' | Witty Art Wall 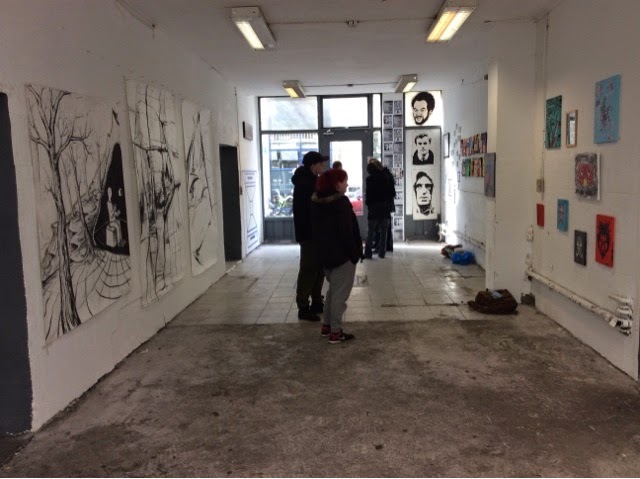 (English version: scroll down below) 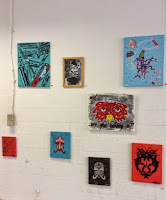 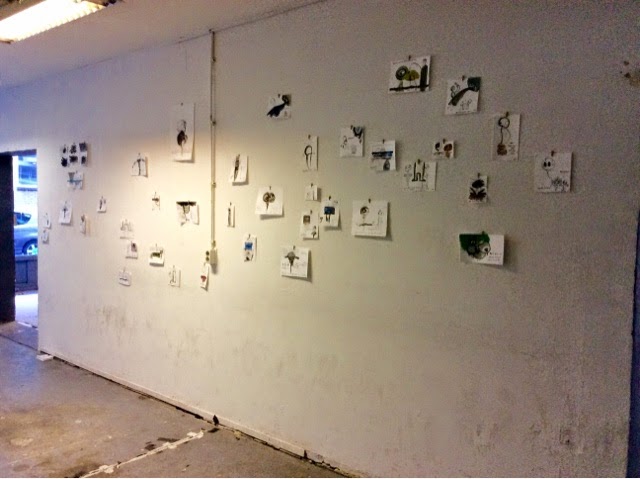 Realised within just two days, this exhibtion is pop-up at its most basic and shows a broad range of art and art styles, brought to you by an ecclectic bunch of talented and enthusiastic creatives.

Just a bit of background on this exhibition:

Recently, I was asked to particpate in a project to highlight the local Makers' Movement in my area, that part in the city centre of Rotterdam called Het Oude Westen ('The Old West'). My partner in crime for this was Menno Rosier, Cultuurscout Rotterdam Centrum. It is his job to connect local creatives, artists and makers with each other and other interesting (social) entrepreneurs and potential partners and clients, such as housing corporations, local governments, urban planners, project developers and so on.

One of the planned activities was a pop-up art exhibition in one of the area's empty buildings. Knowing me, I didn't hesitate for a second: sure, I would organise it, sure, I would show my work as well but I also knew I couldn't do it all by myself. So I called for the support of Nik Draaijer, known as Niks Art Fart. Nik is just as crazy as I am, just as enthusiast and doesn't take ''no'' for an answer. Besides that, he's hugely talented and knows a lot of people. When I spoke to him on Monday, it was just the two of us. By Wednesday, we were with five, came Saturday there were 11 of us and a bunch of other creatives supporting and helping out.

So, how's that for a Pop Up Team! One thing I can tell you, this is one collaboration worth continuing! More on that SOON!

ARTificial Uprising #2: or a bad case of artist paranoia (continued) 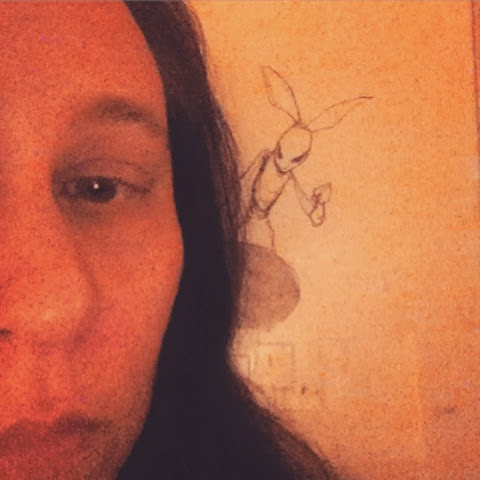 It's been over two tweeks or more now, and I am getting more and more convinced some of my artwork is up to something. Can't seem to shake off the thought they are plotting something behind my back - and that 'something' might not be in my favour... 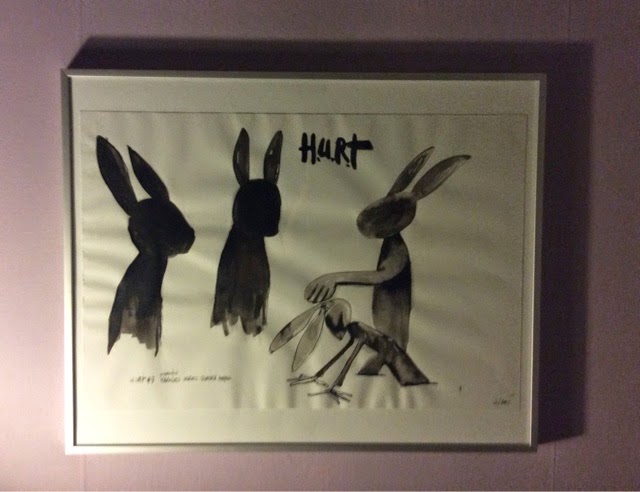 A while ago, 'H.U.R.T. #8' moved to its very proud new owners' home. Last weekend, during a small but nice art party at her place, I was able to take these two pictures. Must confess that to me at least, the whole setting, the lack of lightning, the placing of the roses-sculpure/light in the front, it all provided a dramatic effect that only highlights (and not just literally speaking) the dark world these UnBunnies live in. 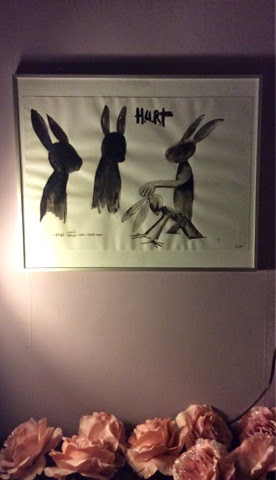 I do like the many different ways that buyers of my work come up with to display their Witty Art. If you are curious, please click here to see more. 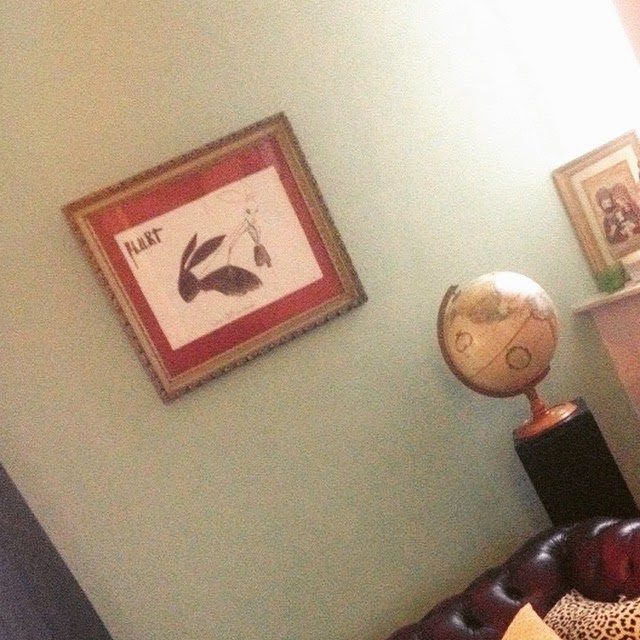 And, in addition to my previous post about the newly added page 'People About Witty Art', I have also updated this blog with another one, entitled 'Witty Art at Your Place'. This page contains pictures (of various quality, some are quick snapshots, others were taken especially for the occasion) of Witty Art at their new owner's places. In their homes, their (home)offices, their stores or otherwise.

It really makes me proud to see how many Witty Art works have already found their way to new homes. And, even more, to see how happy they make their new owners. Had I not already suffer from a bad, bad case of 'GottaDraw', then this would have been all the encoragement I need to never ever stop creating my art.

Finally! I finally found the time to update this blog, by adding a new page, dedicated to 'What People Say About Witty Art'. A selection of what various people - Witty Art owners, fellow artists and people I worked with on various (creative) projects - view my work, how it makes them feel, what touched them or what made them want to have it. Or any other thoughts or emotions. 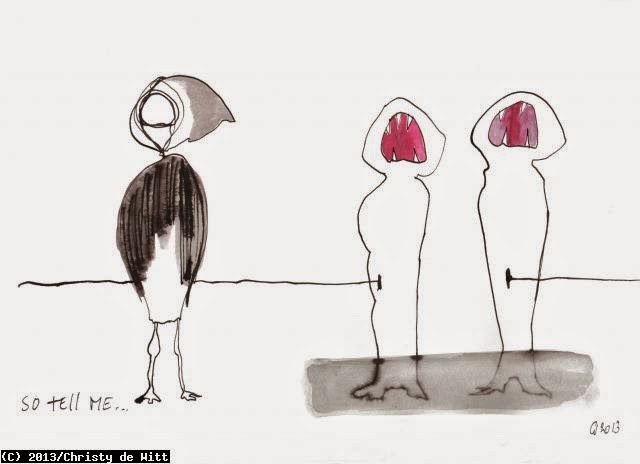 These 'testimonials' are partially in English, partially in Dutch, and the coming days/weeks I will add some more. Whenever I can, and provided I have the time, I will try to put Dutch-to-English translations up there as well, but can't promise anything at this stage.

All together, I think it gives a nice impression of What People Think of Witty Art.

A Huge and Honest Thank you to all of you who have, one way or the other, supported me and still are doing so.

All the best to you, my friends!

ARTificial Uprising #1: or just a bad case of artist paranoia? 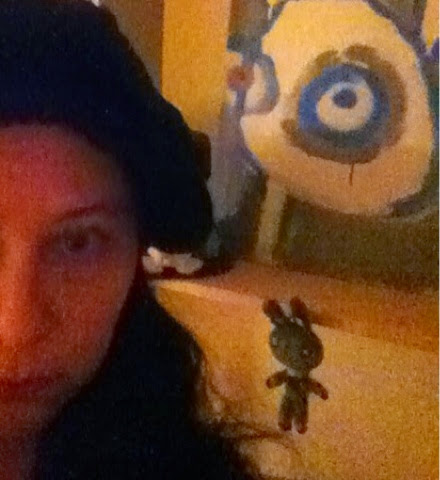 That eerie and somewhat haunted feeling when you feel that your own artwork is plotting something against you #1.