Creative destruction gave life to my series 'Once Upon A Time... Never Happened!' 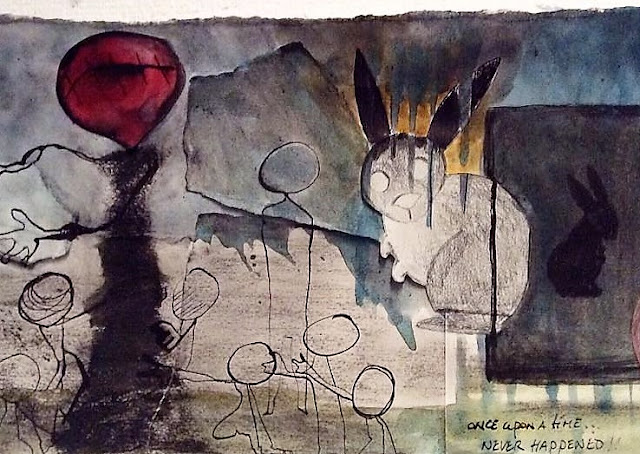 So, a bit earlier I wrote about The Making Of ''Once Upon A Time Never Happened #4'' which offered a little preview of this new series. And now, I'd like to share with you how this one came to be.

Basically, this series emerged purely by coincidence and out of destructive rage. I was drawing, working on another Witty Art Series of a couple of Singles, I can't even remember and it doesn't matter. All  I know is that it just wouldn't go the way I had in mind. The ink didn't flow, my hand didn't direct the pen, the paper was not the right kind, etc.


In short: it all sucked big time. 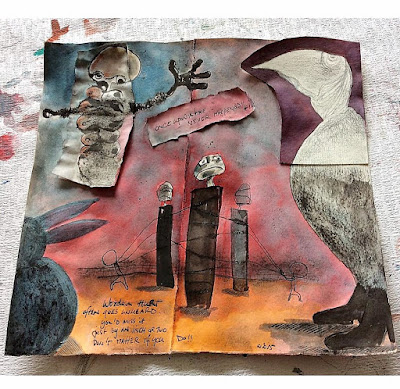 It's one of those moments you frustrate the hell out yourself as an artist, because you try so hard to make exactly that what you have in mind, and nothing, absolutely nothing you try seems to work, in fact, anything you try only seems to make matters worse.

It's when everything inside of you screams: ''Stop! Let go, you idiot!'' and when all ratio in you says and knows you should, the artist in you just cannot give up. Because giving up, basically means you failed - whereas you should have nailed it. 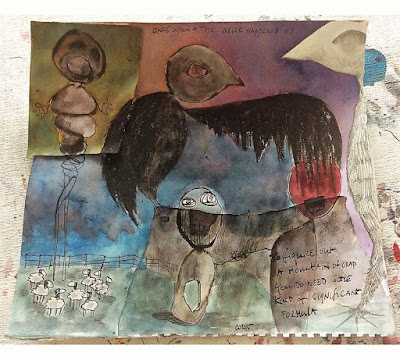 Now, I do realise not all artists nor all creatives are like that. But I am. I get terribly frustrated when I find myself not able to recreate the image I had in my head and the feeling of disappointment when I have to abandon a drawing and leave it ''unfinished'' or even ''mislukt'' is all-absorping. In fact, it's a feeling of pure sadness and loss and I can even really mourn ''the ones that didn't came to be... ''.

Anyway, here I was, being totally frustrated and angry and all, at which point I just teared up this particular drawing. I totally tore it to pieces. And as always when I do that, I felt relieved. No way back, let's start anew.
Untill I caught a glimpse of the pieces lying scattered on the floor. There was something about them that caught my eye.

Something new, something promising and alluring. 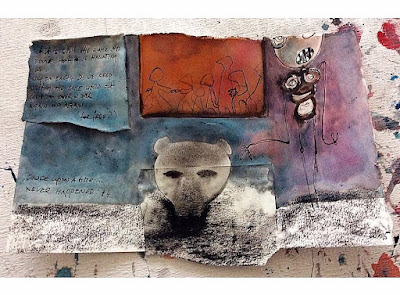 Somehow, these separate pieces of torn paper seemed to tell a story of their own. The way they were arranged, seemingly random, all of a sudden made sense to me. I picked the pieces up from the floor and started rearranging them onto a sheet of blank paper, playing around with them, moving them up, down, left and right all over the surface, taking some pieces out and by then I'd started drawing on to the underlying paper as well. Connecting the separate pieces, tying them together.

Creating a whole new image from one I'd so eagerly and willingly destroyed earlier. 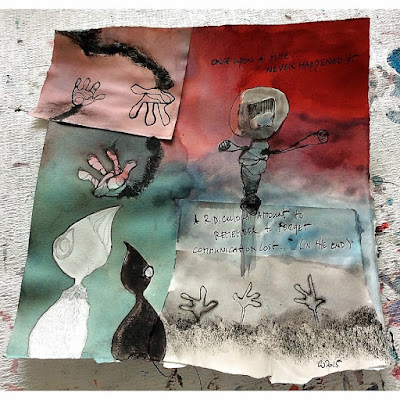 From this process of 'creative destruction' came my series 'Once Upon A Time... Never Happened!', in which I've mixed different classic techniques and media such as drawing with ink, graphite and charcoal, adding coloured ink and watercolours, using both drawing, collage and text into a whole new series of Witty Art.

There are five of them so far - and I really would like to explore this use of mixed media a la Witty further, taking it up a notch or two and work on bigger-sized canvas, perhaps adding the use of digital media as well. But that all will take some further exploring and experimenting, which I can only do once I have set up my new studio again.

Which, hopefully, will not take that long anymore.